Alvaro Unpacks My Day and Puts it in Historic Context 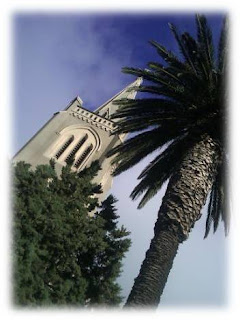 I don't really know where to begin.  Perhaps from the end?

Alvaro was sitting near me on the bus to the hotel.  I felt that I was just about finished talking for one day -- there was so much already on my heart and mind.  But the choice to not strike up a conversation is, I am beginning to think, nearly always a mistake at Lausanne. We were talking about how God was speaking here in the Congress.  He was reflecting on the message by Ruth Padilla, the theme of reconciliation, and his own context of ministry among the indigenous people of Mexico.  Then he sort of tossed the ball back to me.

I said that I wasn't really sure how I could take several more days of this.  It's not that I feel that too much information is being given to me.  It's just so much substance, weightiness.  I told Alvaro how I'll often find myself at big Christian meetings of various kinds and in passing through the crowd I'll overhear snippets of conversations -- the latest trend, the insider denominational gossip, the political stuff, the mind-numbing small talk.  But something different is in the air here.  Today, I walked down a crowded hall and overheard phrases like -- "Evangelism!"; "It's about discipleship!"; and similar things. I looked around and saw that it would often be people from different continents locked in the most intense conversation, praying, hugging, laughing.

As I walked that hall (and now, as I spoke with Alvaro), I had in my mind a captivating conversation that I had earlier with Mahima*. Mahima is from a nation in east Africa.  She spent two years as a missionary in Nepal. And now, she was planning to go to a completely different part of the world to find Nepalis there and work among them - sharing the hope of Christ.  We talked intensely for two hours (during which time, I actually broke a chair), prayed, and parted. 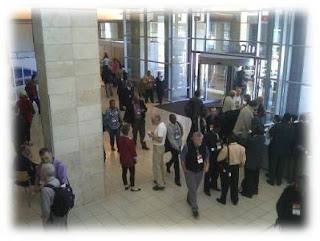 So, I told Alvaro (remember, we're still on the bus), "I've just been thinking for the past hour about how weighty and significant and Spirit-filled my encounters with other people have been this week.  And that as I walked the hall, I realized that what I've been experiencing -- which is nothing less than the most significant encounter with God that I've ever had -- is multiplied by about 4,000!" I told him, "The Holy Spirit is here."

Alvaro sat back in his seat and effortlessly began a discourse that not only took us all the way back to our hotel, but through a significant amount of the history of mission.  He told stories. He quizzed me. But here's what stood out most:  "I was almost at the first Lausanne in 1974," he said with a hint of longing in his voice. "I had the papers in my hands.  I knew Dr. Ralph Winter." Alvaro proceeded to talk about Winter's historic "people groups" speech at Lausanne '74. "That speech has shaped my life for the last 36 years of ministry!  And that's Lausanne! That's what this is!"

So, coming back to my room.  I'm beginning to think that perhaps I'm not so naive as I thought.  Alvaro has been around the block a few times, and he just likened this Congress to the Jerusalem Council. Is this what it feels like to consciously participate in something of truly historic significance?  Will I look back in 36 years, when so many of the implications of this Congress have been realized and say, "I just knew it!"


Can TIBM (our local ministry here, in case you're wondering) do something of significance in response to HIV/AIDS? Global sex trafficking? Modern day slavery? The Hindu caste system?

What is God really saying to me about reconciliation?

Who do I really need to buy souvenirs for?

And now for something completely different . . .

I talked with a friend today who is neat and cool for a lot of reasons.  One of those being that she is actually, really and truly a friend of Don and Lori Chaffer (whose music is my all-time, no-contest favorite and woven into the very DNA of my marriage). And Christy told me that Don and Lori are working on producing a musical that Christy, who's in the biz, says is "Really good!" and she honestly thinks it could make it to Broadway! The musical is based on the Khrusty Brothers.  So I'm smiling about that.  Also, Christy thinks that Don would like me . . . Did you hear that, Don?

Okay, that's all. Sorry it's not more of a blow-by-blow. Such is not what I need to be writing right now.  Thank you for reading.  Thank you to everyone who has taken time to talk with me and bless me in so many ways -- even some people who have sought me out.  I appreciate that. To the guys from ITeams who invited me to hang out tonight - please invite me again.  I will take you up on it next time.  To the Nepali delegation, thanks for the invitation to eat lunch with you all tomorrow.  May the Lord richly bless our time together.  To my new connections on the Lausanne Global Conversation, thanks for adding me.  To the great people of Cape Town, thanks for being so friendly and helping me to learn a bit of Xhosa.


(Note:  I'm sorry that so many people are having to wait a bit longer for the Lausanne videos, etc to be available online. I know they're working hard and around the clock trying to get it going. Pray. I know you remember that it isn't just you that wants to see them -- it's thousands of people around the world.  Until then, there are a bunch of us bloggers that are doing our best to help you know what's happening here.)
Posted by Unknown at 5:19 PM