In Cape Town: Reflecting on the Journey

Hi everyone! Well, as you've guessed by now, I have safely arrived in Cape Town, South Africa -- now to ready my heart and mind for the Third Lausanne Congress on World Evangelization.  I have a strange feeling being here, across the planet, alone.  It is a first for me, although I enjoy being alone sometimes. Still, I feel strange being separated from those closest to me.  Did manage to figure out Skype (which kills Yahoo Messenger, btw) so that I could talk with Katherine.  And now have an unlimited connection here at the hotel, so will be able to do that more.

So, I wanted to tell you all that on the way here, I broke (repeatedly) my cardinal rule as a proud introvert -- I chatted with people.  Yes. Multiple. It started with the University of Western Australia Rugby team that was eating near me at O'hare.  Got the interview here.  They had some interesting things to say.
Then it was a hairstylist from Mali who needed some help navigating the airport in Washington D.C. Next was my neighbor sitting next to me on the way to Senegal was a young research scientist, a Muslim raised in the U.S. but on her way back home to Senegal to give a year of her life to doing cervical cancer screening. Wow! She and I talked a lot about Lausanne and I was impressed by her commitment to many of the same issues.  Gradually, I began meeting fellow Lausanne delegates also in transit.  There was Eldon, Paco, and Niove among others. And lastly, two 3rd generation South Africans of Indian descent (one Hindu and the other Muslim).  We spoke most of the way between Johannesburg and Cape Town.  They basically told me everything I needed to know about the city and what to do and eat.  I must find a "gatsby" at some point, I've been told

I usually totally ignore the people I cross paths with while travelling (and I don't at all feel convicted about that, by the way). But I just felt myself compelled to engage. Especially to ask questions and listen.  I find myself wanting to know what the world is saying about the issues we are wrestling with at the Congress.  G and A, whom I hope to connect with again here in Cape Town spoke much with me about relationships and conflict between people of different religions as well as the important of people from the U.S. learning to listen to the rest of the world. 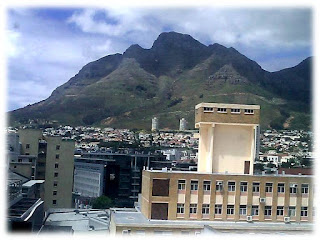 Anyway, I am deeply grateful for those I have been able to meet up to this point.  I am learning from everyone.  And, right now, I'm very impressed by the kindness and warmth of South Africans.  Almost everyone I've met has just seemed cheerful, helpful, friendly.  Keep praying for me please as I continue to listen.  Speaking will come later.  I leave you with a picture from the window of my hotel room -- just to help you see how rough I have it here. ;-)
Posted by Unknown at 6:10 AM