Just alerted to an article in CT that highlighted some Bhutanese-Nepali work going on in Austin, TX. Here is the quote that stood out:
Migrating Ministry | Christianity Today | A Magazine of Evangelical Conviction: "Chris Merrell, pastor of global outreach at Austin's Hill Country Bible Church Northwest, describes Monger's (a Nepali pastor) evangelism style as bold and blunt: 'In his own culture, he knows how to speak to them and what their needs are on a totally different level than what any of us could. His lead-in is generally something like, 'Your name is not written in the Lamb's Book of Life. You're not alive.' He'll just start a conversation with that, and it's pretty fascinating to watch.'" 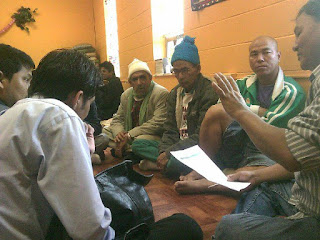 I've seen this with others and have been around after. I don't think I'd describe it as fascinating but rather sad. One wonders if Pastor Chris can speak Nepali and, if not, in what way he's able to assess fairly Pastor Monger's evangelism style. What is fascinating (as well as sad) is to listen to Hindus describe their encounters with Nepali Christians. Recently, I was in a city in North Carolina talking with a Nepali family that was very, very interested in Christ. They described how upon arriving in the US they were eager to learn about Jesus. However, they met a Nepali pastor-type person who shared with them in this so-called "bold and blunt" way. What they understood was that the pastor was calling them "Satan". From that moment, they decided that Christianity really wasn't the answer. I find it naive and irresponsible to simply assume that because someone is Nepali that he/she automatically "knows how to speak to them and what their needs are on a totally different level than what any of us could". I have very often discovered that this is not true.

At the end of the day, I felt that this article read more like a piece of promotional literature for a mission agency.  It is unfortunate that with the first Bhutanese-Nepali church in the U.S. just a few miles away from Christianity Today's offices they failed to do any better than just this little snapshot.  It is true that the Lord is doing a special work among these people but I fear that these kind of articles encourage Americans to stay basically uninvolved and rely on the "indigenous" leaders to do the work of mission.  This is a mistake in the context of diaspora when there are no longer any truly "indigenous" people.  All have entered the realm of liminality. American Christians must be called upon to pick up their cross and enter into this liminality -- to reverse assimilate.  Had we taken the approach highlighted in this article, we'd likely have only a bunch of quarreling Christians and no new Christ-followers.
Posted by Unknown at 9:56 PM