Yesterday, I introduced a new series of posts that originate from a message I shared at the Illinois Baptist State Association last month to a number of the missionary leaders.  My plan is to present here, over the next several days, a series of 5 challenges to IBSA (our state-level association of Southern Baptists) that I believe represent something of what God is saying to us, especially in the wake of Cape Town 2010 -- the 3rd Lausanne Congress on World Evangelization.  So, without further ado, here is challenge number 1:

1. Illinois Baptist State Association must intentionally and diligently seek to bring as much diversity to the table as possible.

Cape Town 2010 was one of the most significant gatherings of Christians the world has ever seen.  In terms of sheer breadth of representation, it was the most diverse gathering of Christ-followers in history.  More than 4,000 selected participants from nearly 200 nations represented practically every sphere of the Body of Christ.  This was accomplished as the fruit of a rigorous process of seeking to draw Christian leaders from every segment of the global Church.  A kind of selection grid was put in place to guide this process: 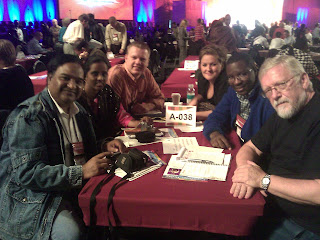 Beyond this, strict quotas were enforced that ensured that the majority of participants really were from the majority world.  My own table group at Cape Town was a microcosm of the global Church.  Six people from six nations.  Four men. Two women.  Three over 50.  Three under.  One under 30.  The benefit of this diversity is perhaps hard to explain, but it was unmistakable.

I've mentioned before my encounters with a number of people there.  The richness, depth.  One of these individuals was a woman from Uganda, a nation now in turmoil.  Both of us young leaders.  Both intrigued by what God is doing among diasporas.  Even now, we are seeking God's will for our ongoing collaboration and partnership in mission.  Our meeting was providential.  God is only beginning to reveal to us his intentions in the long-term relationship that has been forged.  And yet, without this intentional will to represent the breadth of Christ's body, neither of us would have been there.

I compare this with an experience a close friend of mine shared recently.  He had been asked to go to a meeting within our Southern Baptist Convention.  The meeting was to be focused on missions strategy in the U.S. -- how do we plant more churches and reach more people groups?  My friend went to this meeting stunned to discover that his was one of only two black faces in the room.  Nearly everyone was a white American.  The impression he got was that the perspective of immigrant, non-white Christian leaders was not valued.

Do we recognize that God has distributed his gifts throughout the body of Christ and that no one segment of it can truly know it all, do it all, or even dream it all?  Or is Illinois Baptist State Association rather dominated by white, American-born, males who are unaware of the richness in Christ's body that they are depriving themselves of?

A few years ago, the two Karen-speaking (Burma) churches in our state association were invited to perform at the state convention.  They sang and even did some baptisms.  It was great, but this isn't the same thing as truly bringing people to the table.  The leaders of these churches, who carry with them a depth of faith and richness of gifts and experiences that most of the rest of us do not, need to be recruited, mobilized, raised up, cultivated -- brought to the table.  Who God has made them to be must be leveraged for the sake of the to-big-for-any-one-of-us mission to which the Spirit has called us.

In our gatherings, committees, hiring practices, trainings and events, team, and more we must seek out this diversity.  If God has truly distributed the gifts of the Spirit all over the Body (and He has, Eph. 4), do our actions prove that we hunger for all of the gifts, experience, value, and richness that God has ordained?  If not, it is no wonder we experience such want in our mission endeavors, for we have cut ourselves off from God's supply -- the body of Christ.
Posted by Unknown at 10:25 AM