Why Contextualize? (Part 5) The Locus of Spiritual Transformation 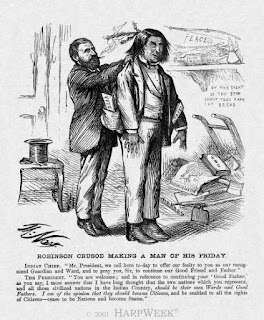 It has been a long time since I wrote the first four installments of my "Why Contextualize" series.  However, as I spend more and more time in the field engaging the realities of cross-cultural mission and the complaints by some against contextualization, there is another (5th) issue that continues to arise.  Just last week, I was on the road teaching about contextualization and heard the following concern (paraphrasing):

"If new followers of Jesus keep the same customs and cultural forms as they had before they became Christians, won't there be confusion as to who is a Christian and who is not?"

I'm grateful for the question because it brings to light what is a dangerous but nevertheless widely held view among Christians (especially in the West) that being a Christian is something that should result in visible, outward signs which essentially equate to an assimilation with Western cultural forms.  Deep down, far too many of us are still trying to "make a man of our Friday's"-- dressing the "savages" up in suits and ties, handing them black leather Bibles and praising the Lord for the "transformation".

But this is neither desirable nor right.  It certainly isn't the gospel. From a Biblical perspective, the locus of spiritual transformation is not to be found in the external, visible realm of customs, clothing, technology, or dietary habits. Rather, transformation by the Spirit of God is an invisible phenomenon -- the giving of a new heart, the renewal of the mind, a re-born spirit.  To be sure, this all will result in a character conformed to the image of Christ and righteous actions.  But that is not to be equated with Windsor knots, Christmas trees, and Chris Tomlin songs (no offense, Chris).  You simply shouldn't be able to pick out a Christian in a line up and if you can, then you've created a kind of pseudo-Christianity that is just far too easy to fake.  You've created a system in which discipleship is reduced to meaningless attempts to pursue conformity to a set of external social cues and cultural forms.  In which case (and I speak from experience), the label "Christian" becomes little more than a way of saying, "Oh I don't celebrate that festival" or "I don't wear those kinds of bodily adornments".  It is a mockery of the gospel and is simply not the thing for which Christ died.  If cultural change is all you are after, why not become a Muslim or join a biker gang or become a mime?

If instead, we assume that God had something else in mind in the incarnation and sacrifice of His beloved Son,  that becoming a Christian is not tantamount to the abandoning of one's culture and traditions (although they certainly are to be scrutinized by the light of God's revelation), then discipleship also has to become something else.  If a person cannot simply trade in their old holidays for new ones, then true spiritual transformation must be located elsewhere.  The locus of spiritual transformation, we find, thus shifts to the unseen yet unmistakable realm of heart, mind, spirit, and character.  And this is precisely where it should have been all along. Hence:


And I will give you a new heart, and a new spirit I will put within you. And I will remove the heart of stone from your flesh and give you a heart of flesh. (Eze 36:26 ESV)

I leave you today with a lovely and ancient description of what I am talking about.  The following is from a late 2nd Century Christian writing known as the Letter to Diognetus (Trans. by D. Bosch):


Christians are not distinguished from the rest of humankind either in locality or in speech or in customs.  For they dwell not somewhere in cities of their own, neither do they use some different language, nor practice an extraordinary kind of life . . . While they dwell in cities of Greeks and barbarians . . . and follow the native custom in dress and food and the other arrangements of life, yet the constitution of their own citizenship, which they set forth, is marvelous, and confessedly contradicts expectations . . . In a word, what the soul is in a body, this the Christians are in the world.