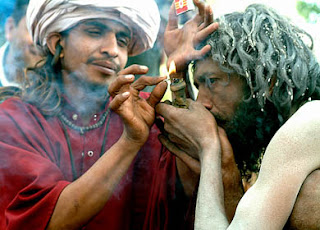 Bhutanese-Nepalis just recently celebrated one of their less quaint and commendable festivals, Shivaratri.  In honor of Shiva, the god of destruction, the Bhutanese refugee community in Manchester, New Hampshire (see below link) put on a festive program at the local Hindu temple.  But what was going on behind the scenes?


Nepalis believe that Shiva was accustomed to smoking marijuana.  Thus, it has long been the custom of the ascetic sadhus to do the same especially during Shivaratri.  Having little interest in the theological and spiritual significance, Nepali youth have sought to seize the moment afforded by the festival to get wasted.  Pot use by Nepali youth during Shivaratri has become commonplace and destructive.

Of course, this article is a wee bit late for those of you looking for insights pertaining to this year's celebration. But I post it here just as a heads up.  Such things exist and are most certainly taking place among Bhutanese-Nepalis in diaspora.  It is very common for host country volunteers to sort of objectify refugees -- thinking of them as innocent little charity cases.  Every refugee is a real, complicated human being -- a bearer of God's image, now marred by the stain of original and personal sin.