Keep the nation of Uganda in your prayers. My sister there wrote me to ask for prayer. She writes: "God has a great purpose for this land...pray that it will come to pass in-spite of the enemy's attempt to stop it."
allAfrica.com: Uganda: Kampala Protests Intensify: "Unconfirmed reports say three people are killed and over 80 others injured. Roads leading to the city centred are blocked as protesters burn tyres and police use teargas. Shops remain shut and transport is interrupted."
Posted by Unknown at 9:09 AM No comments:

Posting this here per the request of a reader.  The following video focuses on what Rob Bell writes about universalism and hell in Love Wins.  For more info on this subject, I recommend digging through James White's site here: http://aomin.org

Posted by Unknown at 3:27 PM No comments:

Pray for Uganda: Violent Riots in the Streets

I just heard about this from a friend online and then contacted my sister who is living in Kampala.  She's okay but said that they haven't been able to leave their house today.  I hope you will pray for the nation of Uganda and ask God to continue to advance his Kingdom there.

Posted by Unknown at 2:50 PM No comments:

Is Prince William the Antichrist?

And with that, I end all that I care to say about the royal wedding -- the marriage of someone who might one day hold a position without authority in a nation that I don't live in. 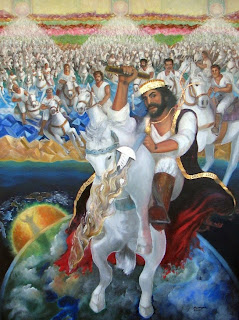 Then I heard what seemed to be the voice of a great multitude, like the roar of many waters and like the sound of mighty peals of thunder, crying out, "Hallelujah! For the Lord our God the Almighty reigns. Let us rejoice and exult and give him the glory, for the marriage of the Lamb has come, and his Bride has made herself ready; it was granted her to clothe herself with fine linen, bright and pure"-- for the fine linen is the righteous deeds of the saints. And the angel said to me, "Write this: Blessed are those who are invited to the marriage supper of the Lamb." And he said to me, "These are the true words of God."

Then I saw heaven opened, and behold, a white horse! The one sitting on it is called Faithful and True, and in righteousness he judges and makes war. His eyes are like a flame of fire, and on his head are many diadems, and he has a name written that no one knows but himself. He is clothed in a robe dipped in blood, and the name by which he is called is The Word of God. And the armies of heaven, arrayed in fine linen, white and pure, were following him on white horses. From his mouth comes a sharp sword with which to strike down the nations, and he will rule them with a rod of iron. He will tread the winepress of the fury of the wrath of God the Almighty. On his robe and on his thigh he has a name written, King of kings and Lord of lords.

Happy Easter everybody!  A few minutes before Monday and my day is just winding down.  It has been good, but I will not wax on today.  Just wanted to share a funny video from our neighborhood Easter/Good Friday party the other day.  My kids wrote the words to the song in the video.  I taught it to the kids and they helped me to perform it.  Hope you enjoy!

Donate to our Team Retreat!

On a bit of a vacation right now.  Kind of a pseudo-vacation really, I have some work with me.  Work to do while I'm away.  Stuff like that.  But hey, the time is quickly approaching for TIBM's team retreat.  Our fundraising efforts have lagged behind.  Less than $500 away from having it fully covered.  I know that hundreds of people read my blog and have been blessed in one way or another by it.  Thousands more by our ministry in general.  This will be a critical time for us to get away with the Lord and one another.  Please give a gift of support today or ask a friend to.  If you can't do either of those things, please take 1 minute to pray that God would provide the support through someone else.


To give, pull out a credit or debit card and make a gift using the little widget below. This is a very secure system and your gifts are fully tax-deductible.

Posted by Unknown at 9:51 PM No comments:

Summary of The Cape Town Commitment

The Cape Town Commitment (CTC) is a masterful and comprehensive document, faithfully reflecting the proceedings of The Third Lausanne Congress on World Evangelization, which took place in Cape Town, South Africa (October 2010). It is impossible to capture the spirit of Lausanne III in a three-page summary, so this synopsis should be read in conjunction with the full CTC."
Posted by Unknown at 9:13 PM No comments:

This is an awesome website to share with your Muslim friends. I have met the great folks that manage the site and heard some of their stories. God is using it wonderfully to bring salvation through the Lord Jesus to many in the Muslim world. Pass it on today to an Arabic-speaking Muslim friend that you know.
MaarifatAllah - الكلمات التي سوف تقرأها هي صحيحة
Posted by Unknown at 8:53 PM No comments:

This year, Soe Rah and I were happy to be able to share our story at the annual banquet of Exodus World Service.  EWS is a great ministry that focuses on mobilizing the Church to connect with and serve the needs of refugees arriving in the United States from around the world.  TIBM has been partnering with EWS for several years.  We really love them and commend them to you as a wonderful and God-honoring ministry.  Below, please enjoy the annual video.

Posted by Unknown at 1:16 PM No comments:

Thousands of refugees are now flowing out of Libya and Tunisia. Get ready, Church!
Humanitarian wars and rejected refugees | openDemocracy: "For France, acting in a ‘humanitarian’ manner means intervening in Libya’s civil war but does not extend to freely accepting refugees from Libya or Tunisia within its borders."
Posted by Unknown at 6:37 PM No comments: 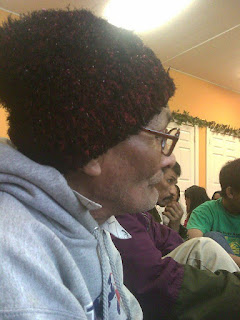 Yesterday, the members of TriEak Parmeshwar Mandali -- a Nepali-speaking Bhutanese church in the Chicago area -- spent time learning, talking, and praying about three great global challenges.  Human trafficking, HIV/AIDS, and unreached people groups were the topics of focus for this young church made up entirely of refugees.  The primary question before them was this: "What would God have us do?"

The discussion was tremendously fruitful and I look forward to seeing what develops from here.  Some of the ideas that came forward including planning dedicated times of prayer and fasting, getting more education about these issues as a group, hosting fundraising and awareness events, and sending mission teams and even full-time missionaries from our church.  Little attention was paid to the fact that the ones having the conversation were mere refugees and thus typically considered unable to even attempt such things.  The belief was firm that with God's help, we could accomplish anything.

LORD WILLING: WE'LL DO SOMETHING!

Today at TriEak Parmeshwar Mandali, our Bhutanese-Nepali church -- a refugee church -- we are going to have a discussion about three huge global challenges.  We will discuss HIV/AIDS, Human Trafficking, and Unreached People Groups / Diaspora.  We will talk, pray, and ask God what He would have us do.  That's right, the congregation is entirely refugee, poor, new followers of Christ. Considered by most to be mere objects of charity. No, we are in Christ. Christ has something for us. We will rise up and do something.

Last night, I appointed three of the churches leaders to be conversation leaders today.  Each will lead the conversations and prayers about each of the key challenges.  The rest of the congregation will be divided into three groups that will spend about 15-20 minutes on each topic.  At the end, the leaders will report back on what they have heard from God and His Church.  Below, is the conversation outline that will be given by the leaders. It is Palm Sunday. Hosanna to the King! Save us! A good time to ask the Lord how He wants to use us as an instrument and vessel of His salvation to those who are crying out around the world.

1. It is estimated that there are approximately 27 million slaves around the world.[1]
2. Around half of trafficking victims in the world are under the age of 18.[2]
3. The average cost of a slave around the world is $90.[3]
4. According to some estimates, approximately 80% of trafficking involves sexual exploitation, and 19% involves labor exploitation.[4]
5. Trafficking victims normally don't get help because they think that they or their families will be hurt by their traffickers, or that they will be deported.[5]
6. In Nepal, every year 10-15 thousand women are trafficked to India alone.[6]

What are some small things we can do this year about human trafficking?
What are some big things that we could do if God really helped us?

Basic Facts and Information about HIV/AIDS

1. More than 30 million people in the world today have HIV/AIDS.[7]
2. HIV/AIDS is among the leading causes of death worldwide and the number one cause of death in Sub-Saharan Africa.[8]
3. HIV/AIDS cases have been reported in all regions of the world, but the large majority of people living with the disease (approximately 95%) reside in low-and middle-income countries.[9]
4. More than 2/3rds of people in the world with HIV/AIDS are in Africa.[10]
5. More than 2 million children in the world have HIV/AIDS. More than 200,000 die every year.[11]
6. 15 million children across the world have lost one or both parents to HIV/AIDS.[12]
7. Asia is believed to have nearly 5 million people living with HIV/AIDS, with India accounting for 2.4 million cases.[13]
8. HIV/AIDS is a growing problem in Nepal because of poor education. Most Nepalis (80%) who have AIDS don’t know that they do.[14]

What are some small things we can do this year about human trafficking?
What are some big things that we could do if God really helped us?

Here are some powerful testimonies of the goodness of God in the face of HIV / AIDS.

Posted by Unknown at 1:51 PM No comments:

This video was also shown at Cape Town 2010.  It focuses on the topic of human trafficking.

Posted by Unknown at 1:26 PM No comments:

Asia Link has produced a couple really great videos that you have perhaps already seen. In case you haven't, I offer them here. The focus of both is mission and the unreached, unengaged peoples of the world. Why not show them to your church or small group this week.


Lost from AsiaLink HistoryMaker on Vimeo.


Tears of the Saints from AsiaLink HistoryMaker on Vimeo.
Posted by Unknown at 1:07 PM No comments:

This is the promotional video that we are using for the Global Diasporas Network to introduce the topic of diaspora mission to Christ-followers.  It was premiered at Cape Town 2010.

Posted by Unknown at 3:58 PM No comments: