Bridging the Divide between Hindus and Christians

It is my pleasure to introduce you to a young leader who is developing into a great thinker even as she learns to write in English.  Originally from Bhutan, Lachi spent most of her life living in a refugee camp in Nepal before migrating to the United States in 2009.  She is a devotee of Lord Sri Jesus who lives within the Hindu cultural traditions that she has grown up with and loves.  Also, she is my sister. -- Cody 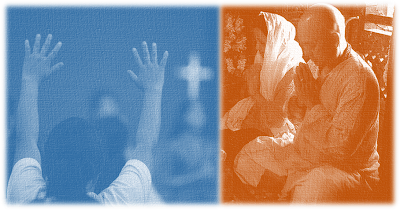 One time I went to a Nepali church.  I saw a child recite a passage of scripture in front of a large crowd.  She was speaking God’s words, but sometimes she became confused and forgot. Her mom said that this happened because Satan was disturbing her.  When I heard this, I was shocked.  As someone who comes from a Hindu background, I know that most Hindu people think that Christian people often blame Satan for everything.  We Hindus don’t understand this this kind of thinking.  This is an example of the kind of misunderstanding that happens between Hindus and Christians.  Christians who want to share the Gospel* with Hindus must realize that there is much conflict and confusion between these groups.

Hindu people and Christian people have very different cultures.  For example, Hindus and Christians observe different festivals. Hindus celebrate Dashain and Tihar but Christians celebrate Christmas.  They also have different customs.  For example, Christian brides wear white dresses but Hindus always wear red.  Hindus believe you should burn dead bodies while Christians want to bury them in the ground.  Additionally, Hindus criticize Christians for eating pork and beef and Christians criticize Hindus for eating fried goat blood.  Christian people feel that Hindu people dress immodestly by often wearing American-style clothes, gold jewelry, henna tattoos, and more.  Those who want to share Christ with Hindus should avoid criticizing Hindu culture because of its differences and instead watch, learn and even join in as you gain understanding.

Hindus believe that Christians are low caste people.  That means that Christians are considered ethnically inferior.  High caste people will not eat food prepared by people from low castes.  They also believe it is wrong to intermarry.  When a Hindu becomes a Christian, they are often automatically thought to be low caste.  Even if they were born in a high caste, they will lose their caste.  Followers of Jesus should not react to this with anger or hatred.  Instead they should try to respect and love their Hindu neighbors.

Hindus do not like the way Christians communicate the gospel.  This begins with their form of greeting.  Nepali Christians greet each other by saying “Jaya Masih” (victory to the Messiah), but Hindus don’t understand this greeting and don’t use it.  Most Nepalis greet by saying “Namaste” (I honor you).  Furthermore, Hindus often feel that Christians speak in a proud and boastful way when they talk about Jesus.  Christian pastors are sometimes criticized for preaching loudly and shouting.  Also, Hindus feel that Christians speak rudely about Hindus and Hindu customs by calling them “Satan” or “satanic”.  Hindus don’t like to listen to this kind of speech.  When talking about Jesus or the Gospel, Christians should speak humbly and focus on clear and simple stories about Jesus or their own experiences with God.  They should not call Hindus “Satan” or speak rudely about Hindu practices.

Hindus are actually very interested in Jesus and the Gospel message.  However, their attitudes towards Christians often prevent them from listening.  If followers of Jesus will become good cultural learners, show love and respect to Hindus, and practice sharing the Gospel with humility then much of the misunderstanding and conflict will be resolved and they will find many Hindus who are willing to listen to what they have to say.

[*The term "Gospel" is used here to refer to the central message of the life, death, resurrection, ascension, and second coming of Lord Sri Jesus and how people can obtain fullness of life and salvation through Him.]
Posted by Unknown at 8:00 AM