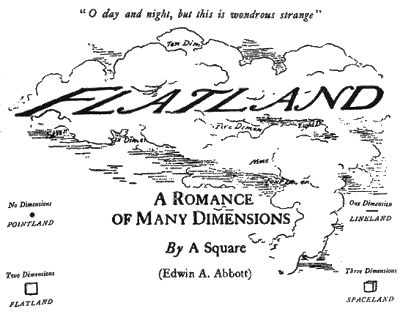 Recently, I completed an old classic novel by Edwin Abbot entitled Flatland: A Romance of Many Dimensions.  I mention it here because (and maybe I see missiology where it is not) I found some interesting insights of missiological significance.  In short, the book is written as a memoir of a "square" that lives in "Flatland" - the world of 2-dimensions.  Most of the book is spent describing this world to those of us in "Spaceland" who exist in three (or four really . . . we'll talk later) dimensions.  This, itself is fascinating -- yes, even to someone like myself who tends to recoil at the mere mention of the word mathematics.  The Square's descriptions of life and society in Flatland bring to mind innumerable issues related to social justice, class and caste, gender roles, government, and much more.

But it was the last chapters of the book that really made me love Flatland.  I will avoid any spoilers here, but suffice it to say that the chapter describing communication between the Square in Flatland with the king of "Lineland" is simply full of terrific cross-cultural insights.  This chapter is then followed by concluding chapters which are much more explicitly missiological as the "gospel of three-dimensions" is proclaimed by a sphere entering the home of the Square in Flatland.  But, I'll leave it there.

I would heartily commend to you Abbot's classic regardless of your interest in mission (unless you prefer a moving story which require little reflection).  However, if you are into missiology, I would put Flatland right next to Alice in Wonderland on my list of great, unexpected missiological texts.  Check it out!

[HERE IS A FREE PDF WITH ILLUSTRATIONS OF FLATLAND]
Posted by Unknown at 12:29 PM