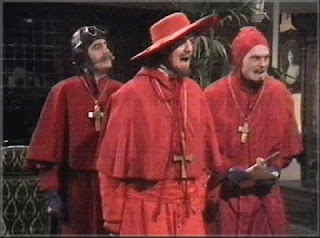 Perhaps no other word in the ecumenical vocabulary has aroused more fears, created more unnecessary controversy, and, more often than not, succeeded in sidetracking urgent issues in the life of the churches in pluralist situations than the term syncretism.  – Stanley Samartha[1]
Very often in discussions regarding the topic of contextualization in mission, one is warned not to “go too far” lest we inadvertently wander into the forbidden realm of syncretism.  Ah yes, syncretism, the very word itself conjures up specters of heretical cult-leaders dabbling in pagan rites and sends most of us running to dust off our Inquisitor tool boxes.  Having learned to uncritically assume the orthodoxy of our received church traditions (most of which are decidedly Western in derivation), we tend to be especially prone to hurl the term at any form, symbol, or ceremony we encounter as foreign.  For far too many of us, the term syncretistic is roughly equivalent to a term like “exotic” or “odd.”
It is better, indeed, safer to command the pagans and savages coming to Jesus to abandon every scrap of their former life and cultural context – to “make men of our Fridays”.  After all, the Biblical appropriateness of leather Bibles, Christmas trees, pig-eating, white wedding dresses, pianos, and Windsor knots is beyond dispute.  But their old traditions?  No, no, they must be discarded.  Failure to do so would be the very definition of syncretism.
I have noticed, by the way, that those who are prone to use a phrase like “the very definition of syncretism” are often the least likely to be able to actually provide a definition of the term.  They seem to take a very emotionally-driven, “I’ll-know-it-when-I-see-it” approach.  Indeed the proclivity to use the term in this way – that is, as a missiological mortar – isn’t uncommon at all.  As the late Carl Strokloff pointed out, syncretism has become the “ten-letter, four-letter word”[2] in missions, used primarily as a device for inciting fear and winning a debate by default.
But what is syncretism?
I have appreciated Richard Twiss’s definition:
“Syncretism can be described as a way of thinking that says by performing or participating in a particular religious ceremony or practice, you can alter the essential human spiritual condition in the same way that Jesus does, through His death on the cross, burial, and resurrection from the dead, because they are parallel truths.”
Twiss, however, would agree with the slight corrective that syncretism speaks more of a result than a process.  Syncretism exists when the Lord Jesus Christ is not at the center of things and when a false gospel emerges -- when this, in Twiss’s words, exists as the “settled state”.  If Twiss is correct then, it is difficult to blame the intentional pursuit of contextualization on the arrival at this “settled state”.  To be sure, something similar in form to contextualization can be a vehicle that gets you there (i.e. accomadatio), but it isn’t the only thing going that direction.  Indeed, if we assume that the practitioner of contextualization begins with a firm commitment to the authority of Scripture and a correct understanding of the gospel and of Jesus Christ, then it would actually be impossible for such a “settled state” to develop so long as theological orthodoxy is maintained.  The nature of intentional contextualization (particularly as possessio) actually seems to preclude the possibility of syncretism as it necessitates the engagement in a continual process of examination, intentionality, and cultural and theological reflection in its appropriation and utilization of symbols, signs, forms, ceremonies, and traditions as communicators of spiritual truth and vehicles of Christian expression.  Syncretism, the “settled state” of an off-centered Christ and an aberrant gospel, requires either poor discipleship or else the uncritical use of cultural forms (regardless of the context from which those forms emerged) to exist.  Thus, it would ironically seem that those who uncritically accept the importation and transmission of foreign cultural forms, symbols and traditions are the ones who are often more susceptible syncretism.  Such syncretism can be witnessed frequently as when Santa Claus is given a major role in the church Christmas drama, when Christian leaders are tempted to mistake financial affluence with divine blessing, or when new followers of Christ are required to add to their faith conformity to various foreign cultural forms.
For the record, I oppose the development of false gospels and the off-centering of Christ in the Church.  Such syncretism is far too prevalent.  But to harass those who seek to magnify Christ by sacrificially imitating his incarnation in cross-cultural mission is no more than a diversion from the real problem.  I have little doubt that the Enemy would have us hunting demons in everything foreign to the received traditions of Christendom so as to overlook the syncretism among us that we have grown far too comfortable with.  Truly, as I have contended elsewhere, the supposed link between contextualization and syncretism is mythological.  Syncretism grows out of some other soil.  As we have seen, understanding the term properly requires us to say more than simply that it is too much contextualization.
For more on this topic:
[1] Samartha, Stanley J. (1979), “Guidelines on Dialogue”, The Ecumenical Review.
[2] Strokloff, Carl.  A Theology of the In Between.
Posted by Unknown at 7:53 PM