The Spiritual Life by Evelyn Underhill 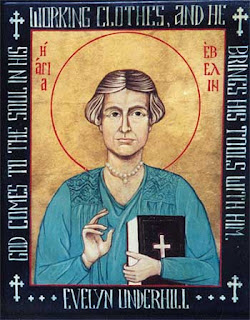 For the second time, I have now prayed through Evelyn Underhill's The Spiritual Life.  Underhill was known as an "Anglo-Catholic" writer and thinker in the early part of the 20th century who wrote chiefly on spirituality and mysticism.  I haven't read anything else by her, but I have really enjoyed this particular book--twice.

This second time through, I feel that I picked up on areas in which I would probably disagree with her if we were to discuss the topic further.  However, Underhill writes with such profundity and insight that it is simply very difficult to point out places where she is wrong.  Besides, it isn't really a theological treatise that Underhill is presenting to us here (though the book is certainly very theological).  It is much more of a meditation, a devotional of sorts.  The book begs to be read in the presence of the Lord and in conversation with Him.  And that conversation isn't supposed to be about Evelyn at all, about whether you and God agree with her doctrinal positions.  It is to be a conversation about your communion with God.  And I think Underhill does a pretty good job of keeping us from wriggling away from that.

So, I recommend The Spiritual Life for mature Christians who just need to sit at the feet of an old saint like Evelyn Underhill and listen to the wisdom she's gotten from the Lord.  Enjoy!

You can purchase the book from Amazon.com by following the link above.  Or, the full text is available online for free here.
Posted by Unknown at 8:38 AM