Of late, I've been trying to consume more classic literature.  I'm working through several pieces now and hope that as I complete them, I will be able to offer at least a little reflection -- hopefully a missiological one, to share with you.  I feel I need to make myself do that for the sake of my own self-discipline.  Plus, it makes me look smart.  Right?

Well, my first test comes as I have just reached the end of Alice's Adventures in Wonderland by Lewis Carroll.   The Disney film version had done a pretty good job of keeping me away from the Carroll's original work for most of my life.  It was learning how easily I could read it on my phone (thanks Google Books) that motivated me to dig in.  Overall, I found the book to be silly, funny, and very clever.  But no one needs me to vouch for Carroll's classic in that regard.  The key question of this blog for Wonderland is whether or not we might draw up from the rabbit hole any missiological insights. 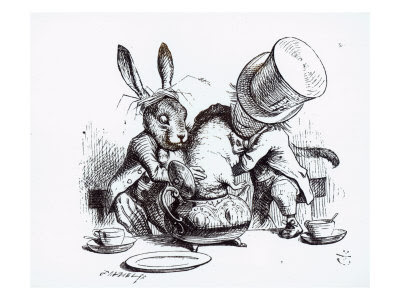 In my experience in reading through the book, it was somewhere towards the end of chapter seven, "A Mad Tea Party", that I actually did begin to think about Carroll's work missiologically.  At the end of Alice's rather ridiculous encounter with the Mad Hatter and the March Hare, she marches off in disgust at what she has interpreted as unbearable rudeness.  Looking back over her shoulder, hoping they would call her to come back and rejoin the tea party, she catches a final glimpse of them, now trying to cram their friend, the Dormouse into a teapot.  The picture provided in Carroll's original work is quite hilarious.  At this, Alice promises herself:

"At any rate I'll never go there again!  It's the stupidest tea-party I ever was at in all my life."


Now, I don't think for a minute that Carroll was trying to say anything much about cultural anthropology, but that scene of Alice storming away from a frustrating and confusing tea party with people she deemed to be crazy, stupid and uncivilized is just about one of the best illustrations I've seen of what happens when we cross cultures.  More often than not, we go in with a certain set of unexamined expectations, definitions, presumptions and rarely ever consider that those to whom we go have their own ideas which may be very different. We may think that we are communicating one thing, but it is received as something entirely different.  Let's take a quick look at Alice's introduction to the Hatter, March Hare, and Dormouse:

There was a table set out under a tree in front of the house, and the March Hare and the Hatter were having tea at it; a Dormouse was sitting between them, fast asleep, and the other two were using it as a cushion, resting their elbows on it, and talking over its head. "Very uncomfortable for the Dormouse," thought Alice; "only as it's asleep, I suppose it doesn't mind."


Immediately upon entering the cross-cultural environment, Alice begins sizing up the scene and interpreting what she sees according to her own worldview.  For example, she sees the Dormouse being used as a cushion and assumes that this is an act of unkindness on the part of the Hatter and Hare.  This process of interpretation, of course, can hardly be avoided.  However, the reflective cross-cultural practioner must be aware that it is happening.  Alice shows signs of this, checking her judgement a bit and granting that since the Dormouse is asleep, he may indeed be plenty comfortable.

The table was a large one, but the three were all crowded together at one corner of it. "No room! No room!" They cried out when they saw Alice coming.  "There's plenty of room!" said Alice indignantly, and she sat down in a large arm-chair at one end of the table.


"Have some wine," the March Hare said in an encouraging tone.


Alice looked all around the table, but there was nothing on it but tea. "I don't see any wine," she remarked.


"There isn't any," said the March Hare.


"Then it wasn't very civil of you to offer it," said Alice angrily.


"It wasn't very civil of you to sit down without being invited," said the March Hare.


I see here a great illustration of cross-cultural conflict.  Alice, by disregarding the cries of "no room", commits a cultural blunder that is interpreted by the hosts as rude and, as we would discover later in the chapter, actually creates a hardship for them.  Alice, completely unaware of her mistake focuses instead on pointing out what they have done wrong.  She gets angry and is the first to openly criticize.  When confronted with her mistake, she dismisses it and essentially blames them for causing the problem:

"I didn't know it was your table," said Alice: "it's laid for a great many more than three". 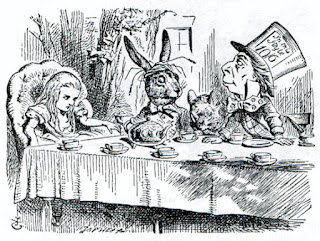 In Alice's mind, whatever mistake she may have made was the result of the actions of the hosts.  Her actions were only reasonable.  Anyone else would have done the same thing.

Well, it goes on like that for several pages.  Some points of the tea party are very rich indeed from a cross-cultural perspective.  Again, that final, funny scene of the Hatter and Hare stuffing the Dormouse into a teapot says it all.  Alice, the outsider, storming away in a huff. Convinced of her rightness.  Frustrated with the hosts' foreignness.  Looking at their seemingly inexplicable actions with contempt.  "The stupidest tea party!"

I'd encourage any of you that are engaged in training cross-cultural workers to take a look at Alice's Adventures in Wonderland and especially the chapter about the "Mad Tea Party".  And, if you do end up using it in any training exercises or if you have any insights from the chapter you'd like to share, please comment below.
Posted by Unknown at 10:58 PM