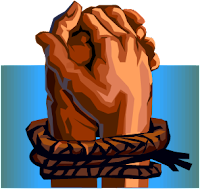 God settles the solitary in a home; he leads out the prisoners to prosperity, but the rebellious dwell in a parched land. (Psa 68:6 ESV)


Here's an article that highlights well an angle of human trafficking that you may not be aware of. I'm not sure that I agree with the tone of the headline which seems to blame Nepal for the large number of women who are exploited. The fault, it seems, lies more with the receiving nations that don't do enough to prevent the abuse of domestic workers. Anyway, this is something the Church should be more greatly aware of. It is shocking to me to know that 9 out of 10 women who leave Nepal for foreign work "are victims of exploitation or sexual violence".
Nepal’s economy dependent on exploitation | MediaGlobal News: "Since the 1990s, in light of increased globalization, more and more women are joining the ranks of Nepalese migrant workers. Of the approximately 83,000 Nepalese women that leave the country every year to work for foreign employers, fully 90 percent are victims of exploitation or sexual violence, says a study by the Foreign Nepali Workers Rescue Center (FNWRC).
Posted by Unknown at 2:33 PM