Entirely Unbalanced: A Review of "Half Devil, Half Child" (Pt. 1 of 3)

In 2012, Red Futon Films released the film Half Devil, Half Child directed by Bill Nikides, whom the film's website describes as "the leading expert in Muslim ministry specifically on the Insider Movement" who is also known for his work as a co-editor to the questionably titled Chrislam (If you want to become a follower of Chrislam like, check this out). That's right, THE leading expert.  So, that just about settles it I suppose.  Any and all detractors now fall firmly into the category of "not THE leading expert". But we press on . . .

If you've been around this blog for awhile, you know that I'm a big believer in the intentional pursuit of contextualization in cross-cultural mission as imitation of Christ's Incarnation and that not only as a sound and Biblical missiological practice but also as a spiritual discipline.  I have written on the level of Biblical and missiological principle [see for example my response to John Piper] specifically in response to Outsider Movement advocates (i.e. those who attack contextualization and insider movements), but my special area of interest is the Hindu world.  For that reason, I make it a rule not to comment on specific forms and practices up for debate in the more popularly discussed realm of contextualization among Muslims.  However, when I saw that this documentary was being kicked all around the Twittersphere, I was more than eager for our own ministry's resident Islamic scholar take a crack at it.

John Raines is an experienced cross-cultural worker and a highly gifted younger scholar who has been with our team for a while and normally writes at his own blog, Speech Acts.  He is, sadly, not the leading expert on Muslim ministry.  However, his response is careful, insightful and does an excellent job of shining a light on the deficiencies, inconsistencies and general imbalance of Half Devil, Half Child - a film that we overwhelmingly do NOT recommend except as a case study in propagandizing. So, without further ado, here is part one of our 3-part review of the film:

Response to the film Half Devil, Half Child - John Raines 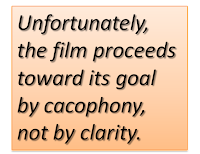 There's a recent documentary film about "the Insider Movement" in Bangladesh. After seeing enough links to it bouncing around the internet, I finally ponied up the $3 and rented it. It's called Half Devil, Half Child, it's 80 minutes long, the interviews are engaging, and I think it will be effective in accomplishing its main goal. What is its main goal? To convince churches in America not to support missionaries who are engaging in the missiological practices of the "Insider Movement." Unfortunately, the film proceeds toward this goal by cacophony, not by clarity on what the Insider Movement is. More importantly, it fails to address how the Gospel ought to be preached and incarnated in the Muslim world, and without this constructive component, the film ultimately just another voice in the shouting match.

The film's most confusing aspects arise from its failure to acknowledge the complexity of the Insider Movement - or, as Cody Lorance recently put it on this blog, that the "Insider Movement" doesn't actually exist, but is instead a lot of different insider movements that are diverse in their practices. The diversity of this kind of missiological thinking and praxis is actually discernible in some of the individual interviews in the documentary, but the film's editing smoothes over these nuances in favor of its big idea –insider missiology is all bad.

The narrative arc of the film conveys one main idea: what started out as a missiological theory in the West has turned into a cesspool of heresy in Bangladesh. To illustrate this point, the film accuses advocates of the "Insider Movement," who are labeled insiders, of a long list of offenses, some of which seem mutually exclusive. For example, insiders are charged with denying Christ by staying in the mosque (in the documentary, none are charged with denying Jesus in speech – only in action – even the main "insider" interviewed in the film was very proactive in sharing what the Gospels say about Jesus), but are later shown as disingenuous because they stay in the mosque when it is obvious to all the Muslims there that they are Christians. So which is it? Do their actions deny Christ or do their actions overtly identify them as his followers? There may be some "insiders" for whom the first is true and others for whom the second is true, but it seems extremely unlikely that both could be true for any one person.

Whether or not an "insider" denies or proclaims Jesus by his or her actions depends upon a massive number of decisions – whether to pray with non-believers or not, whether to wash before prayer or not, whether to pray publicly in the name of "God" or in the name of "Jesus", whether to call themselves a "Christian", a "Jesus Follower", a "Jesus-following Muslim", or simply a "Muslim", whether to quote the Quranic passages that don't contradict the Bible, whether to publicize their rejection of certain Islamic practices or not – thousands of small situations and choices which make up a life that either proclaims or denies Christ. It's actually the same thing that every Christian everywhere has ever experienced, and most of us have a fairly mixed track record. Some of the people labeled "insiders", find themselves in incredibly complex situations and navigate their choices poorly. They seem to deny Christ. Others navigate their choices wisely and, though like the rest of us they still make mistakes, they manage to proclaim Jesus inside the mosque.

Don't forget to check in again tomorrow for part 2 of our review of Half Devil, Half Child.  In the meantime, I strongly recommend taking a look at the excellent article "Worshiping Jesus in a Mosque" recently published by Christianity Today.