On Saturday I recapped part 1 of my 2-part message on preparing for death.  I preached on this topic recently in our Bhutanese-Nepali church here in Chicagoland.  Today, I want to recap part 2.  In the first part, I focused on practical preparations such as preparing a funeral and deciding upon organ donation.  In the second, my focus was primarily on spiritual preparation. 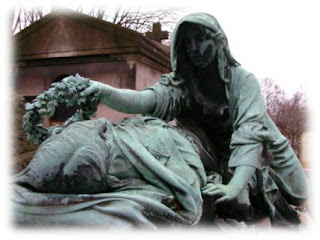 I began by telling the story of the two thieves who were crucified with Jesus (Luke 23:32-46). I made use of volunteers from the congregation to act out the story.  When we finished, we began to reflect together:
1. What was the promise that Jesus made to one of the thieves?
2. Since both men were criminals and both were sinners, why was one forgiven and promised heaven?
The answer was obvious to my audience.  One man, himself not a follower of Christ, answered, "Because he repented and trusted in Jesus."
I then moved on to explaining that we all have certain things in common.  We are all made by God, we all have to eat, drink and sleep.  We are all equal before God because we're made in His image.  Then I added, also we all have a problem with God.  I read Romans 3:10-12, 23.  (Be warned, you have to sort of earn the right to talk about sin with Nepalis. Note this article first.)  I gave some examples of sin and put it this way:
"We know that lying is a sin, but anyway we lie.  We know that greed is a sin, but anyway we are greedy.  We know that gossip is a great sin, but Nepalis would stop eating before they stop gossiping.  We know discrimination is a very great sin, but anyway we discriminate."
I then gave the following illustration to explain Christ's role in reconciling us to God:
"Imagine that in my family when I was younger, I disobeyed my parents and married someone that they didn't approve of.  Now, in my American culture, after some time, if I wanted to be reconciled to my parents, I would go directly to them and ask forgiveness.  However, this is not the way with Bhutanese-Nepalis.  If my family was a Bhutanese family, I would have to do things differently.  In that case, I could not go directly to my parents.  Rather, I would have to ask some of my friends and relatives to go to them.  They would go to the home of my parents and they would say sorry on my behalf.  After that, my parents would call me and invite me to come and all would be forgiven."
Of course, when I told this story, I drew it out a bit.
You get the idea.  The above is actually a very familiar scenerio in Nepali culture and goes a long way in helping them to understand the role of Jesus as a mediator between God and sinners.  We put our trust in Jesus Christ, who is the one who goes between us and God to bring us close to Him.
Answering Questions:
The key spiritual questions that Nepalis have about death relate to whether or not they will become a ghost (bhut pret) after they die.  It is believed that certain kinds of inauspicious deaths (e.g. suicide, murder) or mistakes made during a funeral will lead to the dead becoming a ghost who lingers around the house haunting people (see this article for much more on this idea).  I answered this question Biblically using the following:
1. Death is immediately followed by judgment and an afterlife either with or separated from God (Heb. 9:27)
2. Also, I explained that while both thieves died by execution (inauspicious) and neither received a proper burial, one went to heaven and one went to hell.  The type of death and type of funeral made no difference.  Rather the difference was that one was reconciled to God through Christ and one wasn't.
3.  I also referred to the parable of the rich man and Lazarus.  While Lazarus died and was forgotten, he went to heaven.  The rich man had a great funeral but went to hell.
I closed my message by briefly explaining how we can put our faith in Christ and be reconciled to God.  I clarified that this is the most important preparation we can make for death.  Then I left them with the following illustration:
"Imagine I and Ganesh (a volunteer from the audience) are going on a road trip.  We are trying to drive to Kentucky.  We have a GPS and a map, but the map is way in the back seat.  After driving some way, the battery in the GPS dies.  But we are too lazy to search for the map.  We keep driving thinking we know the right way.  Some time later we come to a fork in the road.  We're not sure of the way, but again we are too lazy to find the map.  We choose to go left and drive on.  For hours upon hours we drive.  Finally we begin to see signs that say 'Florida'.  We are sure that we are lost."
I asked my audience, if we want to reach Kentucky, what do we have to do.  The answer, "You have to stop the car and find the map.  You have to turn around."
I explained that after traveling such a long distance in the wrong way, we may be reluctant to turn around and go back.  But if we want to reach Kentucky, that is what we must do.  I shared Proverbs 14:12 which says, "There is a way that seems right to man, but the end of it is death."
We must recognize that for Bhutanese-Nepalis, embracing Christ can feel like a betrayal of ancestors.  We must be sensitive to this.  I tried to use this illustration to teach them the importance of "turning the car around" regardless of how far down the road they, their parents, grandparents, and great-grandparents have gone.
Posted by Unknown at 1:38 PM