I just recently read through the CT2010 advance paper entitled “Kingdom Stewardship” which was written and submitted by Ram Gidoomal on behalf of the Resource Mobilization Working Group.  This paper will form a basis for a related presentation at the upcoming 3rd Lausanne Congress on World Evangelization to be held in Cape Town, South Africa this October.  On the whole, it is an excellent piece that provides a compelling and holistic portrait of what Biblical stewardship really is and a timely call for the Church to seriously contemplate and embrace the technological realities of our generation and their implications for stewardship.  Today, I want to offer a few comments on Gidoomal’s paper for your consideration.


1.   On the Distinction between Clergy and Laity

In the opening section of his paper, Gidoomal states that one of the primary reasons why a Biblical vision of stewardship has suffered a “setback” in our era is due to the “problematic distinction” and “age-old wall” between what he classifies as sacred and secular vocations. The paper doesn’t greatly elaborate on what exactly is found to be problematic about the distinction.  Moreover, the concept doesn’t obviously carry through the length of the paper nor do much to influence its conclusions.  However, since it is mentioned as a major reason for why Christians aren’t embracing a Biblical view of stewardship, it must be considered important to the author. 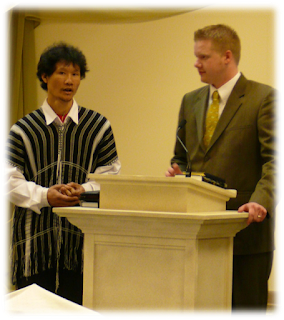 It seems that Gidoomal is suggesting that distinguishing qualitatively between those vocations traditionally associated with the term “clergy” and those of the “laity” is Biblically illegitimate.  Actually, he uses the labels “sacred” and “secular” – terms somewhat loaded to begin with.[i]  Of course, Gidoomal may not have meant this, but since it is certainly possible to arrive at this conclusion from his paper, I want to respond.


I believe that the Bible is quite consistent throughout the Canon in both describing and prescribing this distinction – that there is and should be a qualitatively significant distinction made between clerical and lay vocations.  Even pre-Moses, the office of priest (Gen. 14:8) and prophet (Gen. 20:7) are recognized as having legitimacy.  There is a formalization of Levites as a clerical tribe focused on the tabernacle/temple cultus that begins shortly after the exodus of God’s people from Egypt (Ex. 32:28-29). Of course, it is the office of prophet that receives the most attention throughout the Old Testament – a less formal, but nevertheless a very distinctly clerical vocation.


To be sure, the notion that the clergy should do all the “spiritual work” must be rejected.    This unfortunate misapplication, which is all too often derived from the recognition of a clergy/laity distinction, does not illegitimatize the foundational fact that God has indeed established that distinction.  Quite the opposite is true, as Paul states that the reason for God appointing clergy is to “equip the saints for the work of ministry” (Eph. 4:11-12).  Facilitating the resourcing and mobilizing of every Christian to accomplish God’s purpose in creation and redemption is exactly what God has in mind in the calling forth of pastors, evangelists, and other clergy.  In my view, it would be very appropriate for the upcoming congress to affirm the Biblical legitimacy of the clerical vocations (particularly those mentioned in Eph. 4), and to call on the clergy to renew their commitment to (1) fulfill their responsibility to equip all the saints of the work of ministry and (2) resist the temptation and pressure to “do it all themselves.”


2.   On the Omission of any mention of the Lausanne Global Conversation

Gidoomal provides some very helpful comments on the topic of technology and the Internet.  These must be read and seriously reflected on by Christ-followers who intend to be engaged in Kingdom work during this next generation.  The list of websites provided is very valuable and the “essential ingredients” section is a must read for Christian web developers.  However, I find that this section makes a surprising and glaring omission.  That is, there is no mention whatsoever of the Lausanne Global Conversation (LGC).  I find it difficult to believe that the Lausanne leadership is fully behind the LGC when it is not being written about in this advance paper.

When I attended the pre-congress gathering for the U.S. delegation in Dallas earlier this year, the LGC was presented in a thoroughly exciting way.  The concept of having a central place on the web where the global Church could engage, converse, and share resources with each other was compelling.  I have personally bought into the vision and have sought to encourage as many people as I can to do the same.  In several cases, I have actually created accounts for people and then showed them how to use them just to encourage their participation (I actually did this for my entire staff and have since called two meetings in which I give them a designated amount of time focus on a specific topic and engage on the LGC, then we gather together to discuss).  Now however, I feel I need to be convinced that Lausanne believes that the LGC can become all that we have envisioned it to be.  I long to see all of those key Lausanne leaders (and especially the members of the working group that produced this paper) actively participating in the site, posting resources, engaging meaningfully in conversations, forming their own groups, and otherwise modeling the kind of participation that we all hope to see from the global Church.


So, at Cape Town, we simply must engage in dialogue about the LGC.  Several questions must be asked and answered by the congress:


What must we do to make the LGC the absolute best resource that it can be and needs to be to become the primary web-based facilitator of Biblical stewardship for the whole Church?
What must be done so that the LGC can be universally appreciated as an essential tool for the local church?
How can the LGC effectively partner and integrate with other good stewardship and networking sites so as to avoid needless duplication and the necessity of an individual Christian having to manage a large number of different web profiles?  In particular, how do we identify sites that are comparable to the LGC and effectively integrate and partner with them?  (e.g. My Twitter, Facebook, and YouTube are all integrated so that I don’t need to update all, but they update each other.  In particular, the existence of World Wide Open as a site distinct from LGC is an example of needless duplication.  These should be fully integrated.)
How does the LGC become the central and best place to go for the hypothetical Cameroon-focused workers mentioned in the Gidoomal article?
What must be done before and during the congress to ensure that, at the very least, every individual, local church, and organization represented in Cape Town has an active profile on the LGC before the congress comes to a close?
How do we resource the LGC so that it can be all the God wants it to be for the global Church today?
Finally, at Cape Town, there must be a great and impassioned call for each delegate to utilize the LGC as a primary channel for engaging in global partnership, conversation and stewardship so that we can, as never before, truly become the whole Church taking the whole Gospel to the whole world!


[i] Choosing the right terminology is really pretty impossible.  There is a sense in which Gidoomal’s sacred/secular is appropriate, but it also carries a sense that one vocational category is concerned with the things of God and one is not.  I have chosen to mostly use the terminology of clergy/laity that doesn’t escape the problem entirely itself and brings its own baggage along as well.  In the end, what I mean by “clergy” are those in vocations which are inherently concerned with the Kingdom of God and may only be legitimately performed by individuals who are concerned with the Kingdom of God.  What I mean by “laity” are those in vocations which are not inherently concerned with the Kingdom of God and may be legitimately performed by either those concerned with God’s Kingdom or those who are not.  That is, a non-Christian may perform the role of a firefighter, chef, or governor skillfully, honorably, and in a way that is basically pleasing to God (radical depravity not withstanding).  Whereas that same non-Christian could not be an evangelist, pastor, or prophet legitimately.
Posted by Unknown at 7:37 PM