Today, the United States has more Hindus than any other non-Asian nation in the world with estimates ranging from just under 1 million to nearly 1.5 million (Wikipedia, 2010) (Adherants, 2005). Canada, similarly, is home to an additional 330+ thousand Hindus (Wikipedia, 2010).  As it has often been noted, the Hindus of North America live, work, study, and worship in every major and midsized city—as well as many of the smaller ones—on the continent; tend to be employed in highly skilled and well-paying professions; and represent many of the least-reached people groups in the world. Surely no missiological consideration of people groups in North America is complete without paying careful attention to such a large, influential, and unreached demographic block.  However, we must note that while, as missiologist H.L. Richard has noted, it has become “geographically easy” for North American followers of Christ to reach out to many Hindus, the particular challenges presented by the Hindu-Christian encounter have rendered us largely ineffective in this endeavor (Richard, 2010). 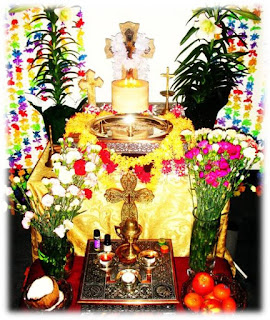 In this series of articles (not complete yet, sorry), I would like to present a summary of what I have found to be some of the most essential points related to the topic of contextualization of Christian discipleship among Hindus. This is not intended at all to be an exhaustive treatment of all points relevant to this topic nor of the particular points that I will raise here.  Rather, as I have worked as a follower of Christ seeking to make disciples among Hindus in North America for several years, I have become convinced that the proper pursuit of contextualization is indispensible for faithful disciple-making among them.  Let me be very clear, I believe that the pursuit of contextualization is a MUST for Christ-followers who seek to faithfully proclaim His salvation to their Hindu friends and neighbors.  Let me briefly expound on that point.


There is no shortage of anecdotal evidence provided by Christian opponents of contextualization who may point to story after story of Hindus who decided to follow Christ  even though the gospel was presented in what might be described as very “non-contextual” ways.  I myself have heard such stories – including first-hand testimonies – dozens of times.  And I have often been tempted to respond by seeking to provide counter-testimonies that seem to demonstrate the superior power of contextual methods to create converts.  However, the underlying assumption of this kind of contest – that God prefers those mission methods, whatever they may be, that produce the most results— is false.  While statistical efficiency is a nice thing to see in our mission endeavors, obedience to the Spirit’s leading and conformity to His will are always to be preferred.  Let me devote the remainder of today’s post to a brief defense of this statement.

A number of Old Testament stories that illustrate this truth come to mind.  One of the first is the account of Abraham and Sarah seeking to fulfill God’s promise of a son (Gen. 15:4-6) by their own devices.  It made practical sense for Sarah to give her servant girl to Abraham as a wife, so that’s exactly what they conspired to do (Gen. 16:1-4).  After all, if Abraham was going to fulfill God’s purpose of becoming the father of a countless people, he would need to start somewhere—and marrying the young and healthy Hagar seemed to be their best bet.  In retrospect, however, we know that God’s desire was produce an heir through Sarah.  And so, Isaac was to be preferred over Ishmael, the child of promise over the child of pragmatism.


Later when Abraham was commanded to sacrifice Isaac, it made no practical sense whatsoever.  By that time, however, Abraham had learned his lesson and raised a sharpened knife over his bound son.  Ready to plunge the blade into Isaac’s flesh, Abraham reasoned that God could raise the dead and preferred the obedience of faith over pragmatism.


Other examples from the Old Testament abound.  If we had time we could consider the story of Gideon or the negative example of Jonah.  A particularly poignant illustration of this truth is found in the rejection of King Saul.  We see King Saul rejected because he preferred the pragmatic over the obedient.  Upon his defeat of the Amalekite army, he was to devote to destruction everything that breathed (1 Sam. 15:3).  But Saul reasoned that sparing the Amalekite king and the best of the livestock as a sacrifice to God made much more sense.  Samuel’s pained cry rings through the pages of Scripture, “What is this bleating of sheep in my ears and the lowing of oxen that I hear?” (1 Sam. 15:14) The prophet is clear, God prefers obedience – “to obey is better than sacrifice and to listen than the fat of rams” (1 Sam. 15:22b).  Saul’s pragmatic choice to set aside the best of the livestock for some kind of grand worship service is called “rebellion” and is likened to “divination.”  His presumption is considered as wicked as idolatry (1 Sam. 15:23).


Overall, I believe that the emphasis of Scripture is very clear.  God wants His people to obey his voice – to prioritize obedience over against pragmatism.  There will be numbers – seasons of exponential increase that sometimes serve as signs of God’s favor and blessing (this is often the way large numbers are used in Acts).  However, the obedient and faithful path isn’t always the most expedient or statistically impressive.  If we compare Amos’ statistical failure to Jonah’s impressive city-wide revival, we may be surprised to find God preferring the prophet that no one wanted to listen to (Amos 7:12-13).  We must not confuse the greater numbers who followed after Jeroboam as a sign of God’s favor on the northern king’s novel worship system (1 Kings 12:20, 25-33).


As we begin this series of weekly articles on contextualization, we must from the outset commit ourselves to the obedient path.  What does Scripture compel us to do?  How can we conform our mission to the will of God?  This must be our preference over any question of pragmatism, efficiency, or statistics.