Today then, will be the first of what will likely be several installments on the subject.  I earnestly invite your interaction.  What I hope to do is to explore the issue with you using my own working presentation on the topic as an outline.  Eventually, I hope to arrive at some solid insights that could be put into a meaningful article or book chapter.  So, let’s dig in.

Now, we obviously must begin with some definitions.  For diaspora missiology, I will use the Seoul Declaration on Diaspora Missiology –

Diaspora missiology is a missiological framework for understanding and participating in God’s redemptive mission among people living outside their place of origin.[ii]

So, the definition of diaspora mission cannot be far off.  Diaspora refers to those individuals living outside their country of origin – the scattered peoples of the world who number some 215 million souls.[iii] So, diaspora mission is all about participating in God’s redemptive mission among them.

So, what is a “church planting movement”?  For this definition, we must look to Garrison who has been perhaps the most influential missiologist on the subject.  Garrison defines the term as follows:

“A Church Planting Movement is a rapid and exponential increase of indigenous churches planting churches within a given people group or population segment.”[iv]

I've taken the liberty of breaking down Garrison's definition into its four component parts.  In the diagram below, we note the desired result or outcome, the primary agent, the central activity to be done, and the targeted field within which a church planting movement takes place: 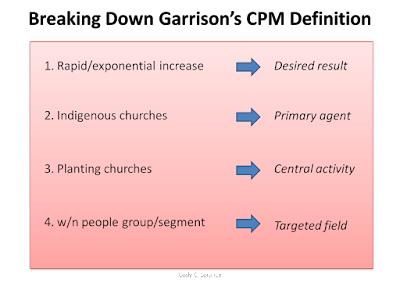 And just like that, we've defined our terms and have a place to begin discussion.  So let me begin the discussion by asking you for your thoughts thus far.  Consider Garrison's definition of a church planting movement in light of what you know about diaspora mission/missiology.  Does anything stand out to you as being potentially difficult to "digest"?