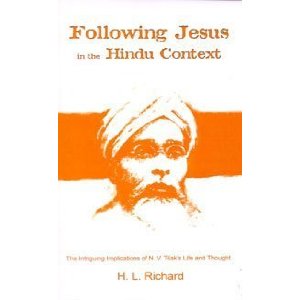 I have just recently finished H.L. Richard's Christ Bhakti: Narayan Vaman Tilak & Christian Work among Hindus (available in updated edition with new title) and wanted to briefly mention it here.  H.L.'s work is a biographical, though not strictly narrative, account of Tilak (1861-1919) who was a rather controversial figure in Indian Church history.  Himself an Indian Brahmin, Tilak's life journey is one of finding Christ as Lord, Savior and Guru and then of finding his way back into the Hindu context as a fully devoted follower of Christ.  In the book, H.L. highlights successes and analyzes flaws in a way that makes the text quite valuable to anyone pursuing an incarnational Christ-life among Hindus.

As my regular readers know, I'm not much for writing elaborate book reviews.  Instead, I will highlight below a few things that especially stood out to me.  Perhaps it will whet your appetite for more:

Tilak on Missions and Missionaries

"I am really tired of Missions and Missionaries. These with their agents form an institution which is day by day degenerating.  They are guided by selfish motives, they are slaves to self sufficiency, pride and the world.  Excepting those who join the flock and live in and for worldly motives, no other person can do anything for their country as long as they depend on these petty lords and their satellites.  There is no end to their underhand dealings, there is no end to their dependence on their flatterers.  I am educating my wife so that I may one day be free of this missionary-Christianity, missionary-injustice, and serve my country and try to lead her to Jesus just as He guides me.  Missionaries and mission-agents can never do more than what money can do." (Sept. 23, 1903)


Hard-hitting? Absolutely. A century has passed since Tilak penned these difficult lines. We who continue to labor as missionaries would do well to examine ourselves regularly in light of his words.  Are we slaves to self sufficiency? Do we basically do only what money can do?

Since I am an Indian, it is natural that I should take pride in our Indian literature and in our Indian mahatmas. But do not suppose it is simply out of pride that I sing their praises.  Tukaram  and Dnyaneswara were once my gurus; and, even though I am not now their disciple, I give them grateful honour as my gurus of former days.  The traditional way of union with the Supreme through bhakti (devotion), which Hindu mystics have conceived and Hindu devotees experienced, may be summed up in the for words, samipata (nearness), salokata (association), sarupata (likeness), and sayujyta ('yokedness' or union); this has helped me to enter into the meaning of that series of Christ's sayings -- 'Come after Me', 'Take My Yoke upon you', 'Become like unto Me', 'Abide in Me'.


Let me just end with a note that I haven't read the updated version that is available on Amazon right now.  I read the 1991 edition printed in India.  I imagine that H.L. has revised and somewhat expanded the work. I am sure that this only adds value to the work.  So, if you are interested in contextualization, Hinduism, biography, etc -- check it out.