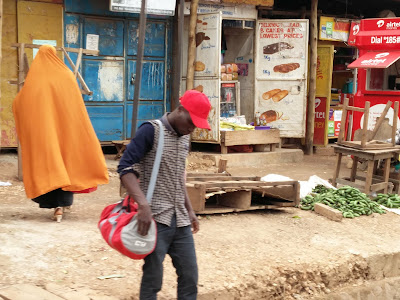 The very first occurence in the Bible of the Hebrew word גֵּר (ger) is quite illuminating.

But, in Genesis 15, it doesn't refer to someone else. It's not a term used to describe the "other".  Rather, it is a word used by God to describe what will soon happen to his own people.

Know this for certain, that your offspring shall be aliens in a land that is not theirs, and shall be slaves there, and they shall be oppressed for four hundred years. (Gen. 15:13)

Referring, of course, to the generations spent by Israel in Egypt, this time as aliens was to be formative -- it would, along with their deliverance, form the two sides of their identity as God's chosen people.  To this day, celebrate a Passover Sedar with observant Jews and you will quickly learn that the "land not theirs" still leaves a mark on who they are.

Actually, a follower of Jesus has only to celebrate the Lord's Supper to know the same.  God's people are still very much those that have been brought up out of Egypt.

It is the normal way of speaking to use the word alien, stranger, foreigner or migrant to refer to someone else -- the other.  But we are not supposed to be normal.  From a Biblical perspective, from Genesis 15:13 to 1 Peter 2:11, God's people have always been "aliens and strangers".  Indeed, it is the definitive way of faith according to Hebrews 11:13-16.

All these died in faith, without receiving the promises, but having seen them and having welcomed them from a distance, and having confessed that they were strangers and exiles on the earth. For those who say such things make it clear that they are seeking a country of their own. And indeed if they had been thinking of that country from which they went out, they would have had opportunity to return.

Those who speak this way make it clear what they are seeking.  I wonder if my words provide the same kind of clarity.

What are you seeking? What kind of homeland? What do you mean when you say refugee, immigrant, alien, stranger, foreigner?

Do you realize that you are the stranger?

Do you understand what it means that this is not your home?