Al Qaeda in Kentucky: Another Setback in the Resettlement of Syrian Refugees 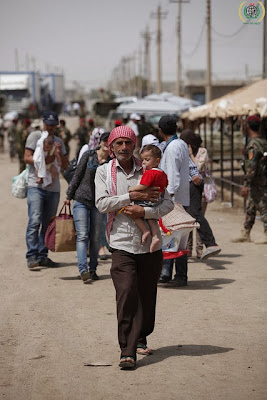 Recently some national media outlets have picked up on a story from way back in 2009 about some Iraqi terrorists who managed to slip through the cracks and enter the United States as refugees.  While shining light on this story will hopefully help to improve the resettlement processes in the country, I am saddened that it will also be used as another excuse to keep Syrian refugees languishing in camps.

During FY2013, the United States resettled only about 35 Syrian refugees and yet the conflict in Syria drags on.  It is expected that the total number of externally displaced peoples will swell to 3.5 million by the end of the year.   And now, in light of the current climate of disfavor towards President Obama's administration, the previously committed public commitment to resettle 2000 Syrian refugees in 2014 (just a drop in the bucket as it is) is being carefully walked back by State Department officials who now say that that number will be shared by several countries.  Which, given the fact that so many Middle Eastern, EU, and Latin American nations have already stepped up to resettle hundreds and thousands of Syrians, is to say that the United States hasn't really committed to anything.  This is a marked departure from the great, modern American tradition of being the world's leader in the resettlement of refugees.

As I prepare to celebrate Thanksgiving and Christmas with my family, my heart goes out to these people and I deeply and sincerely wish that the golden door of my country was open to them.  I pray that my fellow Americans will shift some of their concern about Obamacare and money and scary Muslims and a thousand other things to the side so that we can extend hospitality to thousands of Syrians who are now suffering in the midst of the worst humanitarian crisis in the world today.

Below, you can read the story from ABC News on "Al Qaeda in Kentucky" -

Al Qaeda in Kentucky: US May Have Let 'Dozens' of Terrorists Into Country as Refugees - ABC News: "Several dozen suspected terrorist bombmakers, including some believed to have targeted American troops, may have mistakenly been allowed to move to the United States as war refugees, according to FBI agents investigating the remnants of roadside bombs recovered from Iraq and Afghanistan.  The discovery in 2009 of two al Qaeda-Iraq terrorists living as refugees in Bowling Green, Kentucky -- who later admitted in court that they'd attacked U.S. soldiers in Iraq -- prompted the bureau to assign hundreds of specialists to an around-the-clock effort aimed at checking its archive of 100,000 improvised explosive devices collected in the war zones, known as IEDs, for other suspected terrorists' fingerprints."

Also, check out this great series of short films from the United Nations entitled "Za'atri A Day in the Life" which gives you a terrific inside look into life in the largest Syrian refugee camp.

You may also want to check out other resources posted here on the Syrian Refugee crisis by clicking on the keyword "Syria" below.  Be sure to begin with the key article "Bracing for the Syrian Tidal Wave".