More than 55K Bhutanese resettled- What to expect now 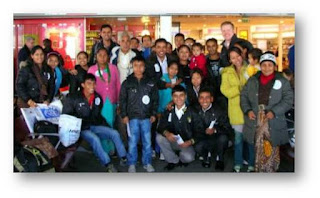 Well, we are now well past the halfway mark in the resettlement process of Bhutanese-Nepali refugees to "third countries". For those of you that are working among these people groups in the United States, the relevance of this is that you should not expect much more primary population growth of the Bhutanese communities that are in your cities. We are now well into the secondary resettlement phase during which refugees leave cities of initial resettlement and move to secondary cities. I suspect that the current economic situation and resulting high number of layoffs will actually serve to increase this secondary movement as rumors of better jobs and services prompt refugees to risk moving from their initial resettlement points.
Other impetuses for secondary resettlement include the desire to reunite with family members, marriages, and the desire to escape poor conditions such as high crime rates or cold weather. Here in the Wheaton, Illinois area, we have been mostly on the receiving end of secondary resettlement but we've thus far experienced very little of it. We have seen a few of our young women marry and move to other cities and at least one case of an individual moving elsewhere for work.
The reality of secondary resettlement underscores the importance of forming national networks to serve the needs of these people and engage in Kingdom work among them. If you are interested in being a part of such a network, do let me know via the comment section or email. No official network has been formed as of yet, but there are a couple useful tools that we can connect you with in this regard.

Below is the full text of a Himalayan News Service article announcing the number of those resettled from the Nepal camps:
The Himalayan Times : 50‚000 Bhutanese resettled - Detail News : Nepal News Portal: "HIMALAYAN NEWS SERVICE DAMAK: Around half of the one lakh Bhutanese refugees that were residing in Nepal have been resettled in various countries under the third-country resettlement programme.

According to the United Nations High Commissioner for Refugees, 55,728 refugees have reached eight different countries under the programme, which was launched in 2008. According to UNHCR, most of the refugees have settled in the US.

The International Organisation for Migration has been involved in the refugee resettlement. Some refugees in the camps have been demanding repatriation. However, their number is believed to be very low. Goldhap camp has been merged with the one in Beldangi after only a few refugees remained in the camps. Timai camp will also be merged, said UNHCR."
Posted by Unknown at 11:30 AM