My friend, Sam George of Parivar International, has recently shared the following information regarding gender inequality and death:

Death and the maiden

Sep 19th 2011, 15:08 by The Economist
Women and girls die prematurely in greater numbers than men
OVER a quarter of all excess female deaths occur in China at birth, says the World Bank's annual World Development Report, published on September 19th. The number has risen since 1990 from 890,000 to 1.1m. These are the numbers of extra girls who would have been born if the normal sex ratio at birth (105 boys to 100 girls) had prevailed in China. It does not do so because of the practice of sex-selective abortion. Aborted girls account for the largest single share of excess female deaths worldwide, but other sorts of death have been growing faster, notably those of women of child-bearing age in Africa. The excess deaths of African women aged 15 to 49 (when compared with female death rates in rich countries) rose by 150% between 1990 and 2008. The number of excess deaths in African countries with high rates of HIV-AIDS increased by 760%. Excess female mortality is shifting from birth in East Asia to adulthood in Africa. 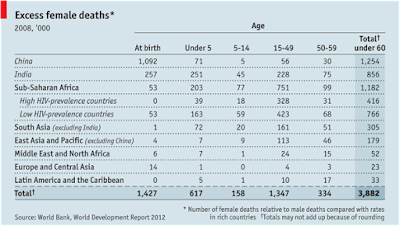