Is the Global Human Diaspora a Good or a Bad Thing?

This past Sunday, I had the privilege of preaching/presenting our ministry to the great people at Grand Avenue Baptist Church in Ames, Iowa. In preparing for this time, I decided that it was an ideal opportunity for me to begin a process of exploring what the Scripture has to say about the global human diaspora.

I said the "global human diaspora." My friend Sadiri Joy Tira refers to this phenomenon as "scattered people" and has provided the following explanation:

The term “diaspora” is originally a Greek word referring to the Jewish dispersion, i.e. to the scattering of Jews outside Palestine (Leviticus 26:33; Deuteronomy 28:64; Ezekiel 36:19) and also refers to the scattering of Christians of the early Church in the New Testament (Acts 8:1, 4; 11:19). Over the centuries, the term “diaspora” has been added to contemporary vocabulary in reference to the People on the Move who will cross national borders, i.e. the scattered peoples. Other terms such as “migration,” “emigration” and “immigration” have been used in reference to People on the Move. 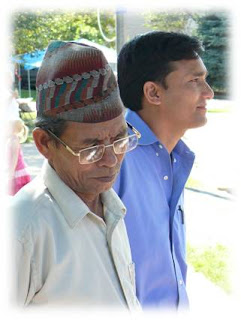 So, the diaspora consists of Punjabi fabric store owners in Hong Kong and Tibetan day laborers in Korea; the Filipino house maid in Singapore and her sister in Qatar; the homeless Mongolian man who hangs out in Little India (Chicago) and the Algerian woman we met in Ames, Iowa. It is refugees, immigrants (documented and otherwise), international students, professionals and even slaves.   It is, as Joy says, the scattered people of the world. It is an old but an increasingly important anthropological and, I believe, missiological phenomenon that Christ-followers must take very seriously.


When I was preaching in Ames last weekend, my focus was on answering the question, "Is this scattering a negative or a positive thing from a Biblical perspective?" My thinking is that when we do consider the phenomenon of diaspora, we tend to think of it as an essentially negative thing.  The portraits we have of it in Scripture, like the Babylonian Exile or the Tower of Babel, seem only to be acts of judgment. But I am beginning to see that upon closer examination, while judgment is indeed an important factor to consider in understanding these events, the scattering itself is a basically good thing.  Let me explain.

When God created the first humans, he commanded them to "be fruitful and multiply and fill the earth" (Gen. 1:28). Humanity had no right to simply stay in one place.  God desired that men and women would scatter, filling the entire planet with divine image-bearers.  So important was this command, that when Noah and his family exited the ark, God repeated it -- "Fill the earth," He said (Gen. 9:7). It is only in light of this command that we can really understand the events of Genesis 11.

I think ordinarily when American Christians interact with the story of the Tower of Babel, they read it as a story of human pride and self-dependence.  The notion of "making a name for ourselves" is what really stands out.  When God acts, confusing the language and scattering the people, we tend to see this judgment against pride.  But if we read it in light of the "fill the earth" command, we can see something else at work.

This is the beauty of preparing weekly sermons on old, familiar Bible stories for an audience for whom the stories are totally new.  My Bhutanese-Nepali brothers and sisters do not bring the same "pre-understanding" to the text that I do.  As a result, they see things that I don't.  In this case, they were able to easily see why the people of Genesis 11 wanted to "make a name for themselves." For someone born in Bhutan and forced to flee to makeshift refugee camps in Nepal, who lived 17-20 years in those camps before relocating to the altogether foreign surroundings of suburban Chicago, there is only one phrase that holds the key to this story -- "lest we be scattered throughout the whole earth" (Gen. 11:4).

The builders of the tower were not motivated by pride as much as they were motivated by a desire to not be scattered.  The tower to be built by this mass of people united in language, culture, and geography was to stand for all generations as powerful centering symbol that was intended to prevent the frightening prospects of dispersion -- the diaspora that God intended from the beginning.  When God intervened, confusing the language and scattering the people, we should note that an important element of judgment is there.  However, the end result was the accomplishment of God's original intent, the filling of the earth with His image-bearers.

So, if we take off our anthropological glasses for a moment (nice as they are), and put on our missiological ones, we arrive at a different kind of definition for the global human diaspora:

The phenomenon of the global human diaspora is God's activity of purposefully scattering His image-bearers around the world in order to gather disciples to Himself from every people, nation, tribe, and tongue.

Paul articulates this nicely in his sermon to the Athenians:

"From one man, [God] made every nation of men, that they should inhabit the whole earth; and he determined the times set for them and the exact places where they should live. God did this so that men would seek him and perhaps reach out for him and find him, though he is not far from each one of us." (Acts 17:26-27)

So, there is a latent call here in the knowledge that the diaspora is a part of God's sovereign plan of redemption.  And that call is to resist that tower-building tendency in us--to resist the fear of otherness and that which is unknown, to resist the urge to do something other than sojourn here, to never forget that we are aliens and strangers here called to intentionally scatter and gather.