SALE: Evangelical and Frontier Mission from the William Carey Library 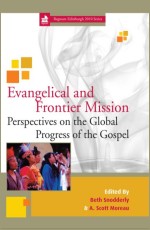 Just wanted to give another "shout out" for the recent Regnum book to which I contributed a chapter. I've just noticed that Evangelical and Frontier Mission is available in the William Carey Library for just $25. That's quite a discount from what you can find on Amazon! I encourage you to buy the book. In addition to my chapter focused on Cape Town 2010, you will find great contributions from Scott Moreau, Rene Padilla, Enoch Wan, Ralph Winter and others. Some accolades for the book include:
"This extraordinary compendium documents and illustrates the movement from what Edinburgh 1910 designated as 'unoccupied fields' to what R. Winter strategically designated as 'unreached people groups' thus repioneering frontier missiology focused on 'finishing the task.'"
-- Peter Kuzmic

"This important volume demonstrates that, 100 years after the World Missionary Conference in Edinburgh, Evangelicalism has become truly global. Twenty-first-century Evangelicalism continues to focus on frontier mission, but significantly, and in the spirit of Edinburgh 1910, it also has re-engaged social action. Pentecostalism exhibits a similar direction, and these characteristics (global reach, frontier focus, social engagement) point to a vibrant future for both movements. At the same time, however, the essays in this volume present a cautionary tale of overstating goals and plans as they relate to proclamation and development."
-- Todd Johnson, Associate Professor of Global Christianity, Gordon-Conwell Theological Seminary
You can also read a bit of a review and recommendation by American missiologist, J.D. Payne at http://www.jdpayne.org/2011/12/21/evangelical-and-frontier-mission/.
Evangelical and Frontier Mission :: Snodderly, Beth :: Authors and Editors :: William Carey Library: "The centennial celebrations of the Edinburgh 1910 conference offered Christians of all stripes multiple opportunities to reflect on the past century of mission. Over the course of the twentieth century one of the stories of the church that has moved towards center stage is the growth of evangelicalism around the world. While certainly until the late 1980s this went largely unnoticed among the academic elite of the world, even so by then the vast majority of the missionaries serving to and from every corner of the globe were be framed in some way by this evangelical surge. As we reflect on the past century, then, the stories of the evangelical world church deserve to be heard. This volume is part of the Regnum Edinburgh 2010 Centenary Series."
Posted by Unknown at 2:59 PM