From Helpmate to Global Leader: My Wife is a Shining Star

I remember a conversation I had with Katherine back when we were dating (or whatever it was that we were doing).  I was explaining to her then about how I really wanted a "helpmate" in a wife -- someone to stand behind me and support me in my vision and calling.  We talked about Bible verses on wives submitting to husbands and how God created Eve for Adam.  It was all fine and reasonably accurate theologically and rather incomplete.

We will celebrate our 15th wedding anniversary at the end of this year.  She has graciously been serving in the background as I have taken the lead.  I don't really regret that arrangement and neither does she.  It has been good and God has used us in ways beyond what we could have expected.

But ... a few years ago, something began to happen that immediately excited me.  Katherine began to turn a corner in her personal ministry of prayer mobilization and some world class leaders took notice.  She became our ministry's prayer coordinator and then also took the mantle of prayer leadership for the Global Diaspora Network.  Her monthly prayer newsletters began to slowly and quietly circulate around the world and by December 2014, captured the attention of even the Billy Graham Center for World Evangelization. 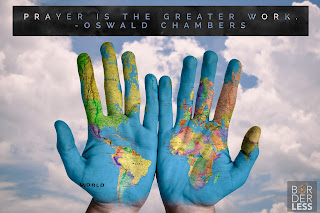 In March 2015, she directed the entire prayer ministry surrounding the Global Dispora Forum in Manila and was personally able to minister to the hundreds of leaders from around the world who had assembled there.  In the year that has followed, the monthly prayer newletters have increased in circulation and are being translated in at least one other language (Korean -- a very strategic one for prayer).  During my recent trip to Singapore for the Diaspore Educators Consultation, plenty of the leaders were already familiar with her work and testified that they were praying in response to the newsletters.  Moreover, some major evangelical leaders have offered their endorsement for a book project that we are working on and plan to release in the Fall.  The goal will be major mobilization of prayer for diasporas.

Now, in just a week, my lovely wife will be getting on a plane bound for South Africa to join Global Prayer Summit.  A few dozen leaders are gathering for the sake of prayer and global prayer strategy development.  I'm thinking of the quote, "Prayer is the greater work" that has often influenced us throughout the years.
an invitation only event called the

If the Kingdom is going to advance in the next 30 years -- and it is -- then it will surely advance through prayer.  Prayer is simply a means by which God has chosen to do things.  Wesley was adamant that "God does nothing except through believing prayer".


So, I'm very excited that God is repositioning my wife to have a greater and greater leadership role in global prayer ministry and mobilization.  I've been pondering how it is very possible that people will come to know her more than they know me - that I will, at least in some circles, come to be known as the husband of Katherine Lorance.  Definitely the me of 15 years ago would not have been very happy with that.  But, the me of now?  I think I'm ready for it.  It feels so good to hear someone praise my wife and her ministry.  I get excited when I think about how her "star is rising".

As a husband of nearly 15 years, I can say that few things have been more satisfying to me in our marriage than to see her sort of "coming into her own" in ministry.  I always knew I had married a very special girl.  I am humbled and grateful for her faithful and loving work in the shadows for this long time.


When the spotlight shines on a great woman ... that is a magnificent thing!

If you have made it to the end of this post, thanks!  I'll remind you that we are still raising money for the South Africa trip.  If you can contribute, please do so now.
Posted by Unknown at 8:53 PM

Email ThisBlogThis!Share to TwitterShare to FacebookShare to Pinterest
Labels: prayer